My Office Space: Before and After

Sometime last year, I mentioned in a post that I wanted to carve out a creative space in my home. I also knew that having such a space would help me be more organized and productive. For what I do, I don’t need a whole room for my office space, so I chose this closet which is on the right as you enter the foyer.  There’s another identical one to the left also.

A horrible before picture. This closet also has the water shut off system(I think?).  It’s  a tiny space but based on the location, it gets lots of natural light and I can actually sit in there and close the door(though my legs would be touching the walls in front). I snapped this picture after I had an electrician wire an outlet so I would have electricity and be able to plug in a lamp and my computer.


Next up was to have the wallpaper installed. I chose the Thibaut Tanzania pink and white spotted wallpaper from their Resort line. I went with this one because the design would pop and make an impact in such a small space.
The Desktop

This picture was taken Last Friday night. I was able to get a carpenter to install the desk top. However, he only had almond colour available, but I said that was fine and I just needed to have it installed and would paint it later on. Install day, I was able to “pretend sit” to ensure the height of the desk top would be placed right where it would be most comfortable for me and accommodate my height perfectly. It was a custom job in every way,  except I had to prep the surface for painting, plus it is formica, so not easy. I sanded with a 120 grit and I purchased a specialty white paint from Benjamin Moore so I didn’t need to prime. However, I did apply a couple coats to ensure even coverage. I also believe Rustoleum has a specialty paint for formica.


The After with probably a finishing coat to go. 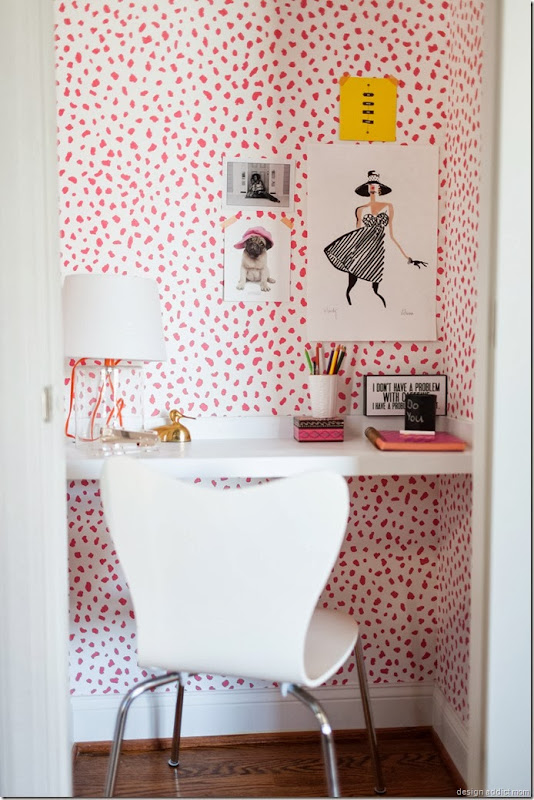 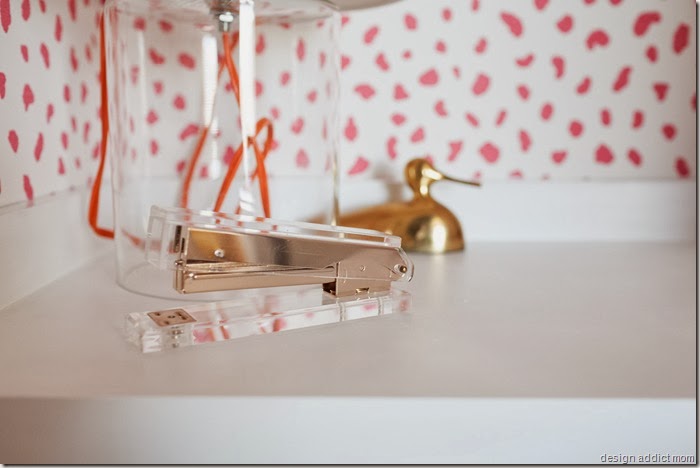 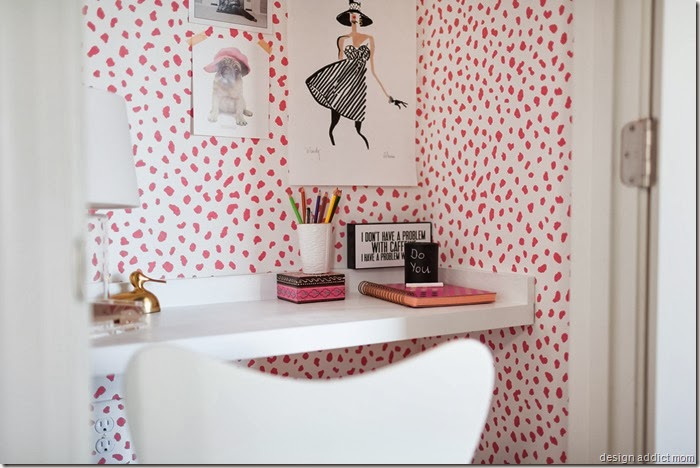 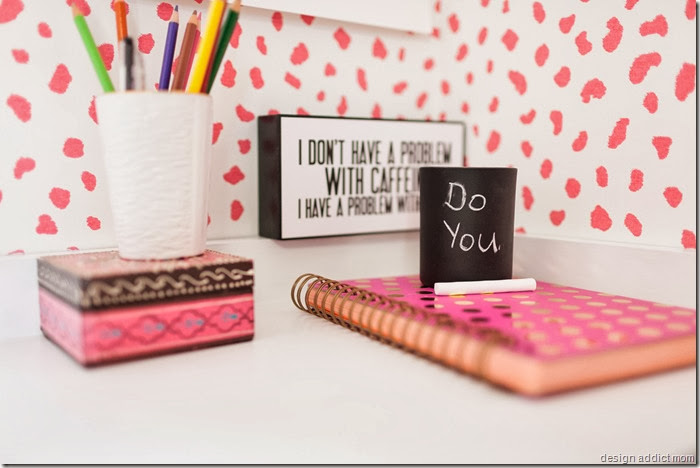 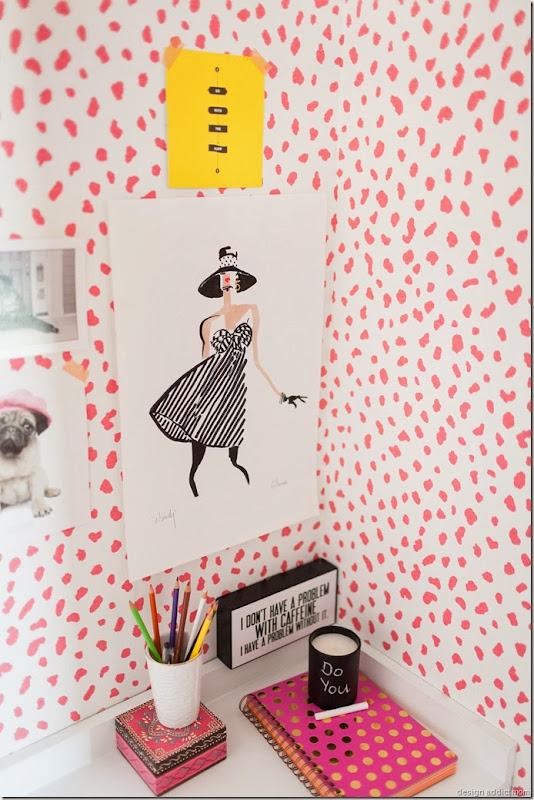 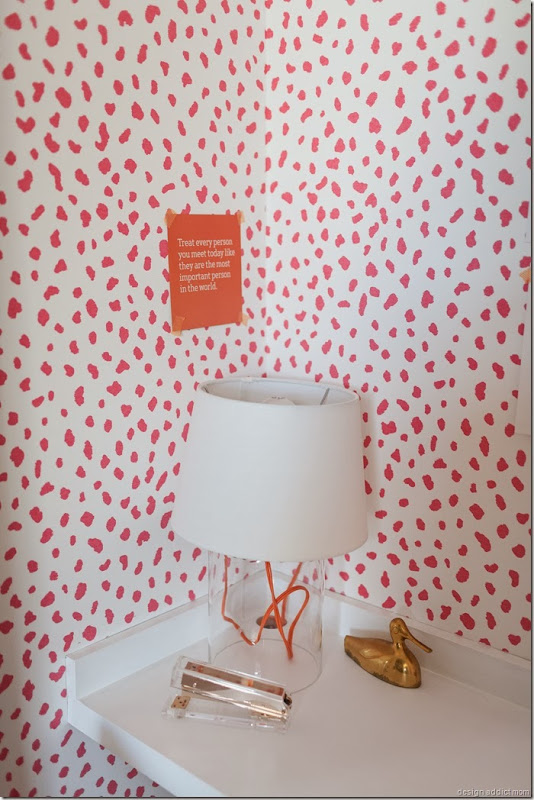 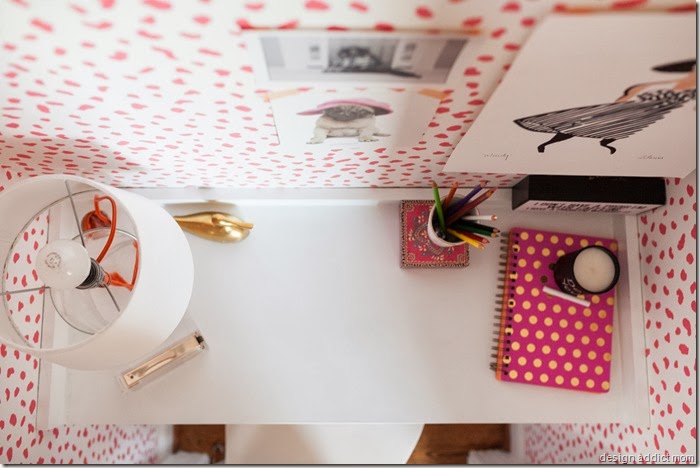 Some of the items used for styling are items I already owned while others were purchased from different places. The lamp is from Target. Well, I purchased the base and shade separately(both from Target). I chose that base because it doesn’t add visual weight since it is transparent and the linen shade adds texture. The lovely diva lady called Windy was purchased from one of my favourite Fashionistas, Edwina at Fashion + Art. The write on Chesapeake chalk candle is one of my faves in the space and I found it  hidden amongst some other things at TJMaxx. The scent is eucalyptus and it smells so good! The chair is the white Scoop back chair from West Elm. The stylish and fabulous acrylic stapler was purchased from the Zhush shop. What do you think? Oh, I used washi tape to mount the pictures/art because I didn’t want to place holes in the wallpaper.

Thank you to Lea of Lea Hartman Photography for capturing the after pics.
Stacey at 5:30 AM
Share

Your comments are like my daily dose of sunshine. They brighten my day:-).